Skip to main content
Once again, we delivered for the 2022 Field of Dreams Game. Learn More

BrightView to Help MLB Bring "Field of Dreams" to Life

Ever since the release of the hit movie Field of Dreams in 1989, there has been little as intriguing to baseball lovers as the prospect of seeing professional baseball played in the middle of an Iowa cornfield.

Now, as announced by Major League Baseball (MLB) Aug. 8, the movie will be coming to life.

MLB and BrightView Holdings, Inc. (“BrightView”) (NYSE: BV) will build it, and the Chicago White Sox and New York Yankees (and more than 8,000 lucky fans) will come.

Construction began this week on the ballpark, located at the Dyersville farm in Iowa, where the original movie was filmed.

“As a sport that is proud of its history linking generations, Major League Baseball is excited to bring a regular-season game to the site of Field of Dreams,” MLB Commissioner Rob Manfred said in the league’s announcement of the game. “We look forward to celebrating the movie’s enduring message of how baseball brings people together at this special cornfield in Iowa.”

“It’s truly an honor to be part of this historic project and we are extremely excited to build and manage the field for the MLB game in Iowa,” said Murray Cook, President of BrightView Sports Turf. “Our team will install and perform all site work and construct the ballfield, bullpens, fencing, and foul poles, as well as oversee the installations of the backstop net and various player related areas.”

The stadium design will pay homage to Comiskey Park, which was once home to “Shoeless” Joe Jackson, by having the bullpens located behind the centerfield wall.

The game between the White Sox and Yankees is scheduled for Aug. 13, 2020. It will air live on FOX at 7 p.m. EDT. It will also be the first MLB game to be played in Iowa.

Fans will have the chance to walk along a pathway through the cornfields and by the original Field of Dreams movie site before arriving at the newly-constructed, temporary ballpark.

A special project like this is nothing new for BrightView. The company was tasked with converting historic Bowman Field in Williamsport, Pa., from a minor-league field up to major-league standards for the Little League Classic in 2017. Similar to the MLB at Field of Dreams project was the 2016 Fort Bragg Game, where a temporary stadium was built for a special game honoring military service members, veterans, and their families.

The company has also worked on other MLB games, such as the 2019 London Series, the 2019 season opener in Japan, and the historic exhibition game in Havana, Cuba. 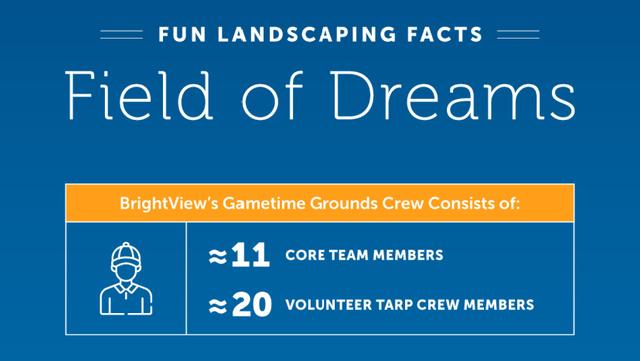